Transport services in Lapland for 90 years

J.M. Eskelisen Lapin Linjat is one of the largest transport companies offering scheduled routes and coach charter services in Lapland. The company, established in 1928, is still run by the same family, now in its third generation.

The founder of the company, Juha Mikael ‘Jukka’ Eskelinen was one of ten children in a crofter’s family. He became familiar with travelling and transport at an early age. His father Juho Taavetinpoika Eskelinen worked in Kolari and later in Muonio, Lapland, as a driver for an inn, and carried people and goods along the Tornionjoki and Muonionjoki rivers. Jukka was entrusted with his first transport tasks when he was ten years old, and at the age of twenty his title changed from crofter to driver.

The story of Eskelisen Lapin Linjat transport company started in February 1928 when Jukka, who was 25 at the time, bought his first Chevrolet lorry. The purchase was special in that it was paid for in cash and wolf hides traditionally worn by Santa Clauses in Lapland. The combined lorry/passenger vehicle transported up to seven passengers and cargo.

The story of Eskelisen Lapin Linjat transport company started in February 1928 when Jukka, who was 25 at the time, bought his first Chevrolet lorry

The company transported both passengers and cargo from Rovaniemi to Kittilä in its early years. 1928 was also important for the company’s future for another reason: Jukka and Katri Elina Eskelinen (née Pekkala) were married. That was the start of Eskelinen’s steady journey on the roads of Lapland – which were in rather poor condition at the time.

There was a great need for professional drivers in the 1930s. The roads in Lapland were poor, difficult to drive on and were often blocked by snow in the winter. Despite the challenging consitions, Eskelinen managed to secure a good position for the company. The second Chevrolet, a combined passenger and cargo vehicle, was purchased only a couple of years after the first one. At that time, the company was still headquartered on Vartionkatu in Rovaniemi city centre, but Eskelinen’s garage and repair shop moved to Koskikatu in the 1940s. It later become the new hub for the Eskelinen company. 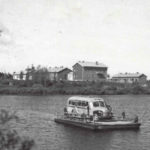 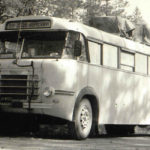 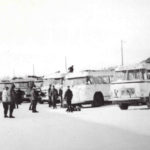 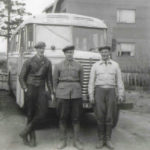 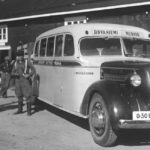 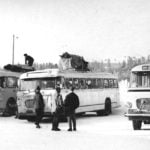 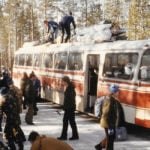 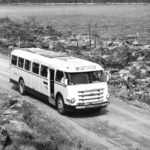 Business was gradually expanded to cover a wider range of routes. A road that was fit for driving on was built between Kittilä and Muonio village centre only in 1933. Prior to that, the transport licence officially covered transport only up to Kittilä. A couple of years later, the route was extended to Muonio. The transport licences of Rovaniemen Linjavaunu Osakeyhtiön were assigned to Eskelinen in 1946. Eskelinen then had two coaches from Rovaniemi to Kittilä and one to Sodankylä every day. Connections northwards from Muonio reached as far as Enontekiö and Kilpisjärvi. Eskelinen’s company type was changed into a limited liability company at the beginning of 1949. In the same year, J.M. Eskelisen Lapin Linjat Oy purchased the fleet and two routes from Liikenne Oy Hannuksela.

Alongside her husband, Elina Eskelinen became a driving force in the company. Thanks to her persistence and perseverance, the company survived the war years when Jukka was fighting at the front, as well as the difficult times in the 1950s when the Eskelinen family was faced with a number of ordeals. In a short period of time, the family lost Jukka, at just 56 years of age, as well as one of the two daughters. After her husband’s death in 1958, Elina Eskelinen became the managing director of Eskelinen Lapin Linjat, a position she held for 27 years. As a tribute to her work, the President of Finland Urho Kaleva Kekkonen granted Elina Eskelinen the First Class Medal of the White Rose of Finland with a golden cross on Independence Day, 6 December 1962.

The Eskelinen family has played a major role in the development of tourism in Lapland. An express connection between Rovaniemi and Kilpisjärvi was launched in early August 1955, and there was a daily connection from Kolari to Ylläs ski resort during the skiing season in 1956. A connection route to extend the Rovaniemi–Inari route to Utsjoki was applied for a couple of years later. This route was a direct connection for those arriving on Aero’s flight from Helsinki to Ivalo and continuing further north.

With the experience of 90 years and millions of kilometres, we know the roads of Lapland like the backs of our hands

After Elina Eskelinen’s death in 1985, her daughter Vuokko Gröhn continued the work of her parents. At the same time, Vuokko’s sons Tomi and Hannu stopped driving coaches and started managing the company. The company grew quickly between 1980 and 1990 when more routes to northern Norway were opened up for the Finnish company. Soon, Eskelinen’s routes reached Tromsø and the shores of the Arctic Ocean, all the way to North Cape. A coach charter service from Helsinki to Lapland, launched in 1996, also served the local tourism industry. A regular service from Helsinki to Rovaniemi was started, and a connection service from Turku to Oulu via Vaasa was commenced.

The Eskelisen Lapin Linjat fleet has steadily increased from a couple of combined vehicles to some 35 Eskelismobiles, used on scheduled routes and coach charter services. Our network of routes has expanded over the years and now reaches from Oulu to Lapland and northern Norway, all the way to the shores of the Arctic Ocean. Our fleet broke through the 1 million kilometre per year barrier in 1956. The total number of kilometres for 2014 was about 3,800,000.

With the experience of 90 years and millions of kilometres, we can say we know the roads of Lapland like the backs of our hands. Eskelinen is now one of the most important coach companies in Lapland. Even though our routes have expanded, our fleet has increased and the number of kilometres has broken records, a few things have remained unchanged: our willingness to serve travellers by offering scheduled routes and coach charter services, and the location of our headquarters. Our main offices remain where Jukka and Elina Eskelinen moved their garage and repair shop to some 57 years ago.